Mercury in the environment is a serious concern in Indiana. Mercury is a nerve toxin that when absorbed in the bloodstream can impair the way we see, hear, walk and talk and cause irreversible learning and speech disabilities. And when mercury gets in the human body or in the environment it does not go away, but accumulates with continued exposure. Less than one gram of mercury in a lake can contaminate the fish population. In comparison, the average household mercury-containing thermostat contains at least three grams of mercury.

The Indiana Department of Environmental Management (IDEM) is focusing on mercury because mercury contamination persists in Indiana lakes and streams (99% of all fish sampled in Indiana have mercury in their tissue), and because mercury accidents endanger the health and safety of children (481 cases reported in 1996 of mercury poisoning from thermometers).

Mercury is a versatile, volatile and variable element. It is a heavy metal. And it can be gas, liquid or solid. Mercury is found in rocks, soil, air and living organisms. Properties of mercury include high conductivity and liquidity at room temperature. These properties make mercury a useful component in electrical switches, including thermostats. Mercury is also used in dental amalgams, thermometers, lighting, electrical equipment, laboratorial chemicals and pharmaceuticals.

The characteristics that make mercury so useful can also harm the environment, making mercury on of the primary pollutants of concern in Indiana. Bacteria and other processes in lakes and rivers can convert mercury into methylmercury, which fish may acquire from the water and food they eat. Methylmercury will build up in the fish tissue and may then be carried up the food chain to humans. Mercury contamination can affect the human central nervous system, kidneys and liver. Fetuses and children are the most sensitive to mercury toxicity. 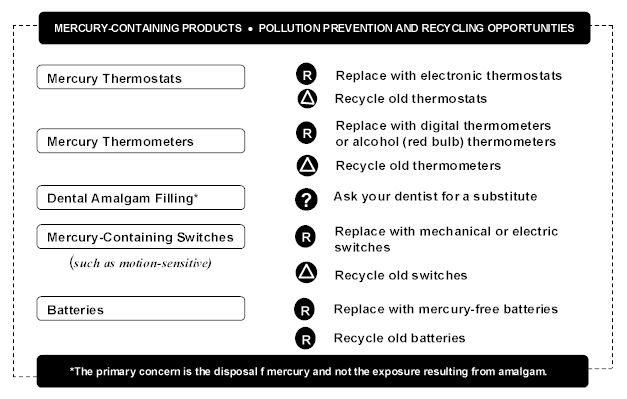